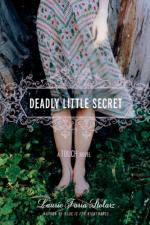 1. Who arrives to visit with Camelia?

2. What color were the flowers on the garment?

3. Where was this person taken?

4. Who perpetrated the attack on Debbie?

1. What strange smell is in the air when Camelia wakes?

2. What does Ben do to prove himself to Camelia?

3. How does the writer feel about Camelia at this point?

4. What concerns Camelia about Ben?

5. What does Camelia do regarding the mailbox?

6. What makes Camelia uncomfortable at work?

7. What is Matt's deception?

8. What does Camelia find when she wakes up?

9. What does Ben say about trust?

10. What does Camelia do after she realizes she cannot free herself?

Pottery is a big part of Camelia's life. Camelia loves her job at Knead and the chance to work with various types of clay and sculpture. Discuss sculpture as it is represented in the story. Which is Camelia's favorite? Discuss Spencer's influence, work, and skills and how they help to mold Camelia's work.

Camelia's aunt is put into a mental hospital after attempting to commit suicide again. Discuss the situation. Why does Alexia try to kill herself? What is the reaction of the family? Who is to blame? Who has accused Alexia of ruining her life? Do you think Alexia is at fault? Explain.

Ben is suspected of committing murder in his hometown. Why is Ben suspected? What proof is there that he is guilty? Was Ben ever charged? If so, what was the result? What is Ben's explanation for the series of events leading up to Julie's death? What is your opinion? Do you think the people were fair in condemning Ben? Does anyone know the truth?