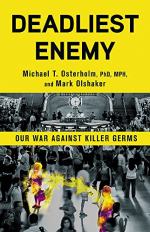 1. In 2014, how many air passengers flew between the United States and the rest of the world?

2. What does Osterholm say is the scariest means of transmission for a pathogen?

3. Which of the following is widely used to grow vaccines?

4. Which former president of Harvard University does Osterholm quote in Chapter 8?

1. What is the term Osterholm uses for the process of a microbe moving from one place to another host?

2. What is the interaction between tuberculosis and HIV/AIDS?

3. Which populations are most affected by malaria infections?

4. What does Osterholm say public health science is based on, and how does the public perceive these things?

6. In Chapter 2, what intensely personal detail of his early life does Osterholm share with the reader?

7. What are some of the current world conditions Osterholm identifies as aiding the transmission of diseases?

8. What does Osterholm view as the scariest means of transmission for microbes, and why?

9. What was the deadliest pandemic of the modern era?

10. Who is considered one of the first creators of the vaccine, and what illness did this person discover the earliest form of the vaccine for?

In Chapter 20, what are some of the characteristics of our current influenza vaccines that Osterholm argues are "unique, and not in a good way?" (286). How does Osterholm believe our influenza vaccines could and should be improved? Write an essay explaining your answers.

According to Osterholm, what is the relationship between widespread antibiotic use in livestock and the proliferation of antibiotic-resistant bacteria? Write an essay explaining your answers.

More summaries and resources for teaching or studying Deadliest Enemy.