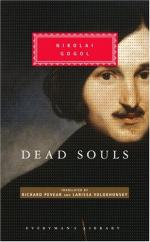 Nikolai Gogol
This set of Lesson Plans consists of approximately 101 pages of tests, essay questions, lessons, and other teaching materials.

Tchitchikov becomes sentimental about his dead souls and begins to make up stories about them. Write your own story about one of the dead souls. Tell about who they were and how they died. The story should be about 200 words.

Take a photograph of something that reminds you of the book. It can be a person, an object, or a scene. Show your picture to the class and explain its relationship to the book.

Write a thirty-second radio advertisement as if you are Tchitchikov looking to buy dead souls from your neighbors.

Draw a picture of your favorite character from the novel. Include a background of a setting in the novel. Color your drawing.

Cast the novel as if it were being made into a movie. Use celebrities and famous people to cast five roles in...

More summaries and resources for teaching or studying Dead Souls.