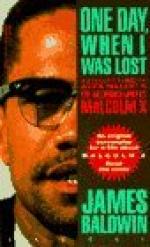 One Day When I was Lost: A Scenario Test | Mid-Book Test - Easy

James Baldwin
This set of Lesson Plans consists of approximately 122 pages of tests, essay questions, lessons, and other teaching materials.

3. How does Archie outfit Malcolm with new clothes?
(a) from a closet of stolen goods.
(b) with cash he made running numbers.
(c) on his credit card.
(d) borrowing from a friend about Malcolm's size.

4. Why does Malcolm put a gun to his head and pull the trigger?
(a) to show he is not afraid to die.
(b) to put on a show for his friends.
(c) to attempt suicide.
(d) to scare people into doing his will.

6. What do the Klansmen do to the Littles' house?
(a) smash in all the windows.
(b) burn a cross in the front yard.
(c) throw black and red paint on it.
(d) set the house on fire.

7. What do the Klan members accuse Earl of doing?
(a) preaching insurrection against the president.
(b) forming a Black Liberation Army.
(c) stirring up the bad niggers in town.
(d) trying to make a name for himself.

8. Where is Malcolm walking with two pairs of shoes tied and thrown over his shoulder?
(a) on the way to school.
(b) on the railroad tracks.
(c) on a basketball court.
(d) on the beach with Laura.

9. Why does Malcolm think they might make him class president at school?
(a) he has a gang who will threaten those who don't vote for him.
(b) most of the students think he is white.
(c) no one else is running against him.
(d) he has the best grades and he is popular.

12. What does Malcolm admit to Laura that made him proud when he was a little boy?
(a) having his mother teach him how to read.
(b) carrying heavy things for his mother.
(c) growing peas in his own garden.
(d) taking care of his baby brother.

13. What happens at night when the Little family has gone to bed?
(a) a storm arises.
(b) Earl is shot in his bed.
(c) Louise has a miscarriage.
(d) the Klan burns down their house.

1. Who is Shorty referring to when he speaks about ofays?

2. What is the name given to Malcolm during a fist fight in prison?

3. Why does Earl have to walk home that night?

4. Why do the gathered crowd and the firemen all stand looking at the house burn down?

5. What does the teenage Malcolm excel in that wins him admiration?

More summaries and resources for teaching or studying One Day When I was Lost: A Scenario.

One Day When I was Lost: A Scenario from BookRags. (c)2022 BookRags, Inc. All rights reserved.