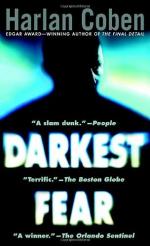 Harlan Coben
This set of Lesson Plans consists of approximately 127 pages of tests, essay questions, lessons, and other teaching materials.

1. In exchange for a deal, what information will Edwin Gibbs give Myron and the FBI?
(a) His confessions.
(b) The location of other bodies.
(c) Money that belongs to the Lex's.
(d) Jeremy's location - dead or alive.

2. With whom does Myron plan on meeting at his office?
(a) Rex Reynolds.
(b) Lamar Richardson.
(c) James Marshall.
(d) Suzze T.

3. In Chapter 25, How does Grover react to Myron's presence around Susan?
(a) He threatens Myron's family.
(b) He punches Myron in the face.
(c) He thinks Susan deserves Myron's treatment.
(d) He forces Myron to be respectful.

5. Who does not believe that Dennis Lex is involved in Jeremy's disappearance?
(a) Esperanza.
(b) Kimberly Green.
(c) Win.
(d) Eric Ford.

1. Who brings Myron to Melina's apartment?

2. Where does Myron find Jeremy?

5. What is Stan uncertain of his ability to do?

1. Why does Emma, Myron's mother, wish for Myron to visit home and speak with Al?

2. What information does Myron gather from his meeting with Peggy Joyce?

3. What does Myron notice at Melina's house that seems weird?

4. Where does Stan agree to take Myron once he admits his father is the Sow the Seeds Killer?

5. When Myron meets with Susan Lex again, how is he threatened?

6. What does Greg admit to Myron about Emily?

7. What does the FBI believe Stan did?

8. What continues to shock Myron regarding Stan Gibbs and Susan Lex?

9. Why does Stan wish to bring the Lex's down?