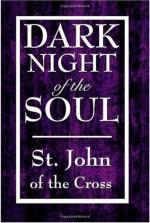 Dark Night of the Soul Quiz | One Week Quiz A

John of the Cross
This set of Lesson Plans consists of approximately 132 pages of tests, essay questions, lessons, and other teaching materials.

1. During the dark night, what does the Christian want to do when the spirit of blasphemy descends, according to Book I, Chapter XIV?
(a) Obey all of God's commands.
(b) Speak out in tongues.
(c) Speak out loud, blasphemous statements.
(d) Commit suicide.

2. What might descend upon a Christian while he is going through the dark night, as described in the final chapter of Book I?
(a) A feeling of inner peace.
(b) Fits of insanity.
(c) A perverse or giddy spirit.
(d) A desire for secrets.

3. What does the soul become enkindled with during the dark night, according to Book II, Chapter X?
(a) Revulsion to faith.
(b) The weight of sin.
(c) Repentance of sin.
(d) The love of God.

4. The author states that people can only move on the ladder when they have a feeling of what for themselves?
(a) Pride.
(b) Contempt.
(c) Strength.
(d) Forgiveness.

5. Who else can descend and ascend upon the spiritual ladder besides men, according to Book II, Chapter XIII?
(a) Angels.
(b) Children.
(c) Animals.
(d) Devils.

1. What does God want to do with those who go through the most intense darkness of the dark night?

2. Who does the author cite as someone who has seen the spiritual ladder?

3. St. John says that it becomes clear which parts are purified and which are still not purified during what time in the dark night?

4. The example the author uses about purification illustrates an understanding of what concept?

5. In Book II, Chapter I, what does the beginning Christian become after passing through the dark night?

Dark Night of the Soul from BookRags. (c)2021 BookRags, Inc. All rights reserved.