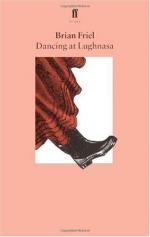 1. What does Uncle Jack promise he'll do soon?
(a) Walk four times a day.
(b) Teach a class on Ugandan customs.
(c) Go to the harvest festival.
(d) Say Mass in the house.

1. How old is Michael when he receives the letter from the other Michael Evans?

2. When does Uncle Jack die?

3. Where does the other Michael Evans live?

4. What popular song does Gerry Evans dance to with the sisters in Act 2?

5. When does Michael get a letter from another Michael Evans?

1. How is the Ryangan harvest festival described by Uncle Jack similar to the festival of Lughansa?

2. When Uncle Jack hears wedding bells, he asks if it is one of his sisters who is getting married. Who is actually marrying?

3. What do you make of the kites as a symbol or metaphor, and of the fact that they wouldn't fly?

4. What does Uncle Jack reveal about his ministry in Ryanga when Kate asks if the people gather together for Mass?

5. What phrase did Kate hit upon that comforted her as she tried to understand Uncle Jack's changed attitude toward life since his stay in Ryanda?

6. Where did Gerry Evans sign up for military service, and why is that location significant?

7. What is Michael writing to ask Santa Claus to bring, and why is the gift he wants significant?

8. How did Michael behave as his father, Gerry Evans, had done?

9. Who does Maggie forget to count when she is calculating people they must feed for dinner?

10. What does it tell you about Gerry Evans that he says he will check the ignition and sparking plugs of the radio?