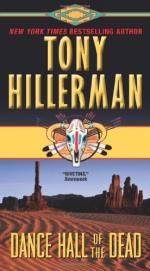 Tony Hillerman
This set of Lesson Plans consists of approximately 118 pages of tests, essay questions, lessons, and other teaching materials.

1. In Chapter 5, who does Leaphorn witness driving away from the commune?
(a) Dr. Reynolds.
(b) Ted Isaacs.
(c) Two men and two women.
(d) Susanne.

2. According to Susanne in Chapter 6, what had George asked her about the day before?
(a) Where to find a kachina.
(b) Kachina forgiveness or absolution.
(c) Converting to Zuni religion.
(d) How to become a shaman.

3. According to Cecil, why is a kachina after his brother and Ernesto?
(a) Ernesto told something taboo to George.
(b) Both boys ignored kachina warnings.
(c) Both boys committed sacrilege.
(d) George did something against the Zuni religion.

2. In Chapter 1, the Little Fire God spies a light on in a camper below him. He guesses that Ted Isaacs is doing what?

3. Ernesto Cata is one of the missing boys. What other name or role does the reader know Cata by?

4. According to a neighbor, where is the owner of the commune land believed to live?

5. In Chapter 5, what face turns to scarred white ice?

Dance Hall of the Dead from BookRags. (c)2020 BookRags, Inc. All rights reserved.