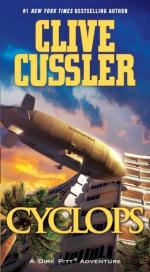 Clive Cussler
This set of Lesson Plans consists of approximately 150 pages of tests, essay questions, lessons, and other teaching materials.

• On March 9, 1918, Lieutenant John Church contemplates the strange voyage of the Cyclops.

• The ship bound from Rio de Janeiro carries 309 crew and passengers, an odd cargo in a crate, a very ill patient, and a strange man.

• The captain, Lieutenant Commander George Worley, is a drunk who places crew members under house arrest if his orders are not obeyed.

• When a distress call comes in, Church learns that the captain has ordered a communications blackout.
• Church argues with the captain about responding to the distress call and is ordered to his quarters for the remainder of the journey.

• Rather than obeying the captain, Church inspects the ship.

• Church encounters Alfred Gottschalk, the American consul to Brazil, who asks to be escorted to the cargo hold to inspect the crate.

• The crate appears to have been tampered with and opened.

• Suddenly a shadowy figure jumps out and kills...

More summaries and resources for teaching or studying Cyclops.