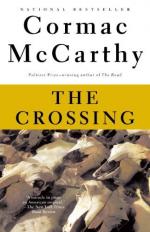 This is an experienced rancher already at a young age who learns all he knows from his father.

This character is headstrong and is often accused of being sullied up.

The mother of two boys, she is a religious woman who worries about her family and serves as a caregiver in all the traditional roles of a woman of this era.

The father of two boys, he is a hard man in many ways but seems to genuinely love his family and takes his role as provider very seriously.

This is the man who owns the traps and lure that Billy and his father borrow in their attempts to catch the wolf.

Owner of a ranch, he tells Billy and his father that they can go to Echols' cabin in search of the traps.

The Rancher in the Model A