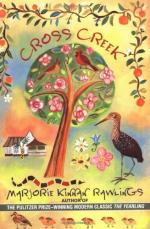 2. What river did Dessie and Rawlings travel together?
(a) The Halifax River.
(b) The Ocklawaha River.
(c) The St. John River.
(d) The Mississippi River.

5. Which of the following conditions did NOT strike Rawlings's house when she left Kate and Raymond in charge?
(a) Her house was filthy.
(b) Her bank was emptied.
(c) Her alcohol had been drunk.
(d) The animals were missing.

6. According to Rawlings, which season suggested "relaxation and indolence"?
(a) Fall.
(b) Winter.
(c) Spring.
(d) Summer.

8. Which of the following was another name for salted pork in Florida?
(a) Marbled bacon.
(b) Black bacon.
(c) Pink bacon.
(d) White bacon.

9. Which of the following baked goods was considered from "the high caste"?
(a) Stawberry muffins
(b) Bundt cake.
(c) Biscuits.
(d) Chocolate brownies.

10. How did Rawlings describe the king snake that lived near her driveway?
(a) Aggressive.
(b) Friendly.
(c) Lazy.
(d) Intimidating.

12. Which of the following birds did Rawlings watch daily and claim were "honeymooning"?
(a) Pheasants.
(b) Robins.
(c) Drakes.
(d) Doves.

13. Which servant did Rawlings blame for the damage to her house while she was away?
(a) Raymond.
(b) Kate.
(c) She did not blame either of them.
(d) She blamed them both equally.

14. In what room of her house was the baby cottonmouth snake that Rawlings killed?
(a) The kitchen.
(b) The bedroom.
(c) The bathroom.
(d) The cellar.

1. Which of the following vegetables was regularly trimmed and cooked like asparagus?

2. What was the name of Rawlings's cow?

3. Which of the following "varmints" was a popular pet in Cross Creek?

4. Which of the following adjectives best described the yachtsman's wife?

5. Which flowers did Rawlings and Dessie study on their river adventure?

More summaries and resources for teaching or studying Cross Creek.