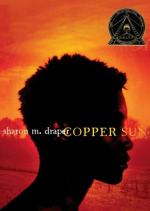 1. What is NOT true about Mrs. Derby's treatment of the slaves?
(a) She ignores them.
(b) She is generous toward them.
(c) She has written up papers to free Noah when she dies.
(d) She asks them how they are.

3. Which of the following is NOT a cause of death during the death march?
(a) Gunshot.
(b) Blood loss.
(c) Suicide.
(d) Infection.

4. How does the woman whom Amari befriends in the holding area know so much about what is to come for the newly-captured Ewe people?
(a) She has been sold before.
(b) She has been reading about the slave trade.
(c) She just seems to have a sixth sense.
(d) Her mother has educated her on these matters.

6. How does Clay communicate with Myna after the beating by Mr. Derby?
(a) By sending for her nightly.
(b) By sending her candy.
(c) By visiting with her daily.
(d) By delivering daily love letters.

7. What is one clue that the strangers in the Ewe village are not there on a peaceful mission?
(a) They do not smile.
(b) They make threats as soon as they arrive.
(c) They refuse to participate in the celebrations.
(d) They bring gifts.

8. After Mr. Derby finds out about Isabelle's baby, where will Polly's indenture be sold?
(a) To a brothel in New Orleans.
(b) To a tea plantation nearby.
(c) To a farm in Florida.
(d) To a friend in Georgia.

11. What foods does Teenie make that remind Amari of Africa?
(a) Peach pie and Hoppin' John.
(b) Mashed potatoes and vegetable soup.
(c) Fish stew and yams.
(d) Hoppin' John and yams.

12. Where does the ship containing the kidnapped Ewe people make landfall in Part One?
(a) Sullivan's Island.
(b) Charleston.
(c) Tybee Island.
(d) Boston.

13. Why does Teenie not know her exact age?
(a) She has never cared about age.
(b) She is too young to be aware of her age.
(c) Slaves' birthdays often were not recorded.
(d) Her mother taught her that a woman should never tell her age.

14. How does Clay respond to Polly's questions and ability to read in Part Two?
(a) He kindly answers her questions.
(b) He tells her she should talk to Mr. Derby.
(c) He tells her that women should know their place.
(d) He ignores her completely.

15. What is Polly reading when she is introduced in the novel in Part Two?
(a) The documentation of her indentured status.
(b) A wanted sign.
(c) Her freedom papers.
(d) A newspaper.

2. What happens to the African man who brands Amari?

3. If Polly were allowed to work in the big house, where does she envision spending her time?

4. Where does the ship in Part One ultimately take the captures Ewe people?

5. Which of the following is NOT an example of onomatopoeia?