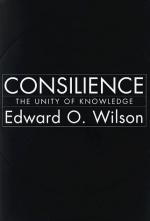 1. Where did Wilson develop the idea of unified learning?
(a) In his research on ants.
(b) In his writings on religion.
(c) During his childhood.
(d) During his science studies.

3. What two fields did Wilson connect in his theory of unified learning?
(a) Philosophy and evolution.
(b) Epistemology and religion.
(c) Classification and evolution.
(d) Evolution and genetics.

5. What effect does Wilson say evolution had?
(a) It changed the classification of animals.
(b) It ended the importance of religion.
(c) It changed the social order among men.
(d) It revealed the mechanism of God's working.

6. Wilson says that biological classification is based on the "Origin of Species" and what?
(a) Systematics.
(b) Systems theory.
(c) Military organization.
(d) Dianetics.