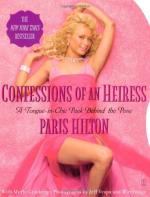 1. Why does Paris write this book? What does she think about herself?

Paris explains that people seem to have many misconceptions about her, and that she wrote this book in order to give an honest view of who she really is.

2. What does Paris think about herself? How is she groundbreaking?

She is someone who is happy with herself to an extent that she never minds when others make fun of her image, because she can make fun of herself. Paris believes that there is nothing worse than being boring. Paris considers herself to be somewhat groundbreaking, as she was one of the first socialites to start runway modeling. At the time, this was considered shocking among her social circles, but her actions paved the way for other socialites to begin runway modeling as well.

3. What does it mean to be an heiress?

Being an heiress means being in charge according to Paris, who consistently takes matters into her own hands and follows her dreams. She projects confidence and gives instructions on how to emulate her, with one of her rules being to always act as though the spotlight is on you. She explains how to add attitude to your behavior and says that people will help you if you expect them to but that an heiress should also never be mean. In addition, an heiress should have secrets, or at least pretend to have secrets, so people will want to know more about them.

Confessions of an Heiress from BookRags. (c)2022 BookRags, Inc. All rights reserved.