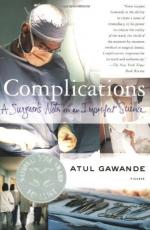 Atul Gawande
This set of Lesson Plans consists of approximately 144 pages of tests, essay questions, lessons, and other teaching materials.

This quiz consists of 5 multiple choice and 5 short answer questions through Full Moon Friday the Thirteenth.

1. Who examined a stack of electrocardiograms to test his diagnostic skills against the computer?
(a) John Brighton.
(b) Hans Ohlin.
(c) Andrew Weaver.
(d) Henrich Wagner.

2. When does the American College of Surgeons convention take place?
(a) April.
(b) July.
(c) September.
(d) Mid-October.

3. What statistician described a classic example of imagining patterns where really there are none when he described the Germans' bombing patterns of South London in World War II?
(a) William Feller.
(b) Wagner Westford.
(c) Brandon Wyatt.
(d) Lance Bridger.

1. How long after Bryce Shouldice left medical school did he begin performing hernia operations at Shouldice?

2. At what hotel was Gawande staying for the surgeon's convention?

3. How late were clinical sessions lined up until at the surgeons convention?

4. What did Tommy Lasorda always eat before a game when he managed the Los Angeles Dodgers?

More summaries and resources for teaching or studying Complications: A Surgeon's Notes on an Imperfect Science.

Complications: A Surgeon's Notes on an Imperfect Science from BookRags. (c)2020 BookRags, Inc. All rights reserved.