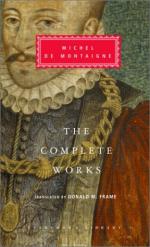 This Frenchman was born into the nobility, and his works are the subject of this book.

This man is responsible for having translated this massive body of writings into modern English.

This Roman playwright is mentioned repeatedly by the author throughout the book.

This Roman's wisdom is often quoted one sentence at a time in the "Apology to Raymond Sebond".

These ancient people inhabited the area of modern France in the time of the Romans.

This Athenian philosopher is noted for having established an institution of higher learning.

This influential Macedonian philosopher is mentioned only briefly by the author, citing his advice about proper marrying age.

The author cites this English leader was being upright and honorable.

This is one of that names of the...