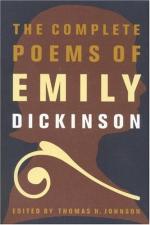 Emily Dickinson
This set of Lesson Plans consists of approximately 134 pages of tests, essay questions, lessons, and other teaching materials.

1. Emily concludes Poem 1176 in saying that _____ would be normal if people weren't afraid to rise above themselves.

3. In Poem 964, Emily writes about the way in which God accepts His children. Although Emily tells Jesus she does not know Him, He tells her who He is and _________.

5. In Poem 723, as the ship capsizes, what are all members of the crew doomed to as they fall below the waves?

1. Describe how Emily deals with the subject of Fear in Poem 608.

3. In Poem 964 Emily writes about the way in which God accepts His children. Describe this poem.

6. Describe the poet's feelings about remorse in Poem 744.

7. Describe the poet's vision of Abraham and Isaac in Poem 1317.

8. The first two lines of the different versions of Poem 1357 are the only two that are exactly alike. The remainder of each poem differs entirely from the other. Describe the first version of Poem 1357.

9. How does Emily feel about the concept that pain grows less over time in Poem 686?

10. What comparisons does Dickinson make in Poem 1374?

Analyze the structure of the following poem. Note the poem's meter, rhyme, assonance, consonance, and alliteration. Describe how these combine to form the poem's tone. "Not Sickness stains the Brave, / Nor and Dart, / Nor Doubt of Scene to come, / But an adjourning Heart --".

Discuss the author's vision of nature as depicted in her poetry. How does her nature imagery stand out? Cite examples from the text.

Poem 465 begins, "I heard a Fly buzz -- when I died -- / The Stillness in the Room / Was like the Stillness in the Air -- / Between the Heaves of Storm". What symbolism is used in this poem? How do these symbols lend us to more meaning in terms of its theme?