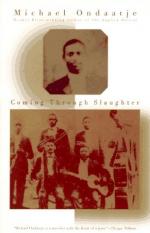 Michael Ondaatje
This set of Lesson Plans consists of approximately 94 pages of tests, essay questions, lessons, and other teaching materials.

Write a series of journal entries. Do one entry for each significant stage of Buddy's life (from his time working at fun fairs with Webb through his commitment).

Write a series of musical critiques about Buddy's music. Include one that adamantly praises and one that strongly criticizes.

Paint the scene of Buddy's time in Slaughter, LA which represents his last taste of freedom.

Write lyrics you think would go well with the type of music Buddy plays.

Select a scene which would translate well to a play. Write the...