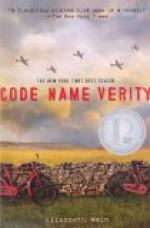 • Part I opens with the written confession of Julie Beaufort-Stuart, a Special Operations Executive in the British Army in 1943.

• Julie is being held at Gestapo headquarters in Ormaie, France, after being captured by the Nazis there some weeks earlier.

• At this point in the book, the reader only knows Julie as "Queenie," her nickname among her British colleagues.

• Queenie is writing her "confession" in tones that are at turns defiant and full of shame.

• Queenie is ashamed to have made a deal with...