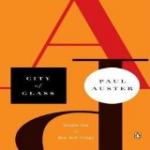 1. What object does Stillman carry with him everyday when he makes his rounds?
(a) An old carpet bag.
(b) A torn umbrella.
(c) A battered suitcase.
(d) A new duffel bag.

3. What great truth is Stillman attempting to discover through his research in Chapter 9?
(a) A new language.
(b) A new race.
(c) A new home.
(d) A new God.

10. Which notable character in City of Glass is the narrator friends with?
(a) Peter Stillman.
(b) Virginia Stillman.
(c) Paul Auster.
(d) Max Work.

11. What does Quinn do after he is unable to contact Virginia by phone in Chapter 11?
(a) Quinn wanders aimlessly around the city.
(b) Quinn goes shopping for a new car.
(c) Quinn visits Paul Auster.
(d) Quinn dreams of a world in which his family is alive.

13. What is Quinn's opinion of fate?
(a) Quinn does not believe in fate.
(b) Quinn does not know what fate is.
(c) Quinn believes in fate only under the right cirsumstances.
(d) Quinn has believed in fate all his life.

2. What toy does Paul Auster's son find on the street?

3. Who is the first person Quinn calls after becoming a bum?

4. Why does Stillman refuse to talk to Quinn when they first meet?

5. Who does Quinn decide to visit in the beginning of Chapter 10?