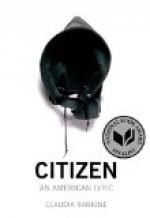 This set of Lesson Plans consists of approximately 128 pages of tests, essay questions, lessons, and other teaching materials.

The author describes being told not to wear this item of clothing indoors.

The author says that one of the only vessels that have made any major headway toward ending racism around the world have been the power of these.

The author employs this symbolism to illustrate a feeling of expansion, of being swallowed and made a part of something larger, where individuals don't matter as much as the collective whole.

This was employed as the weapon of murder in the James Craig Anderson hate crime.

In Chapter 6, the author chronicles the failure that was the tragedy of Hurricane Katrina. She employs this symbolism as a part of the contamination and a representation of society.

This event is described in Chapter 6 and is used as a symbol of the destructive force and nature of racism and prejudice...