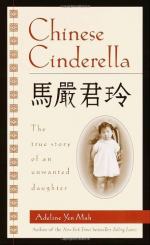 Her mother died two weeks after she was born and she was given a European name by her stepmother.

Adeline and her four siblings were instructed to call their new stepmother this name which is a Chinese term for mother.

When Adeline was just two weeks old, her mother died and this woman was charged with raising the baby.

She was a caring grandmother and the head of the family and Niang took over as matriarch after her death.

He would sneak money to his grandchildren so they could take the tram to school.

He was very detached from Adeline through most of her childhood.

She was usually not very kind to Adeline and was jealous of her outstanding scholarly performance.

Unlike her sister, this woman was kind to Adeline and treated...