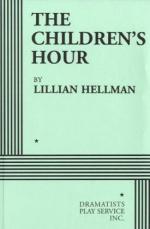 Lillian Hellman
This set of Lesson Plans consists of approximately 113 pages of tests, essay questions, lessons, and other teaching materials.

1. What is the setting for THE CHILDREN'S HOUR?

The Children's Hour is a three-act play set in the Wright-Dobie School for girls in the 1930s in a small town in Massachusetts.

2. Who are the founders of the Wright-Dobie School?

The school was founded by two single women, Martha Dobie and Karen Wright.

3. Why was the play considered controversial at the time it was written?

The play was considered very controversial for its time because of its obvious theme of lesbianism.

The first act opens during an afternoon in April in the study-room of the converted farmhouse that houses the school. Several girls aged twelve to fourteen are busy sewing or studying or working on various projects. The room in monitored by Mrs. Lily Mortar, Martha's aunt, a woman of forty-five who is dressed more glamorously than the situation warrants.