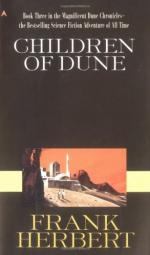 Frank Herbert
This set of Lesson Plans consists of approximately 131 pages of tests, essay questions, lessons, and other teaching materials.

2. What training exercise does Leto practice when his inner voices turn against him?
(a) Picturing himself from infancy through old age.
(b) Deep meditation.
(c) The Litany against Fear.
(d) Deep compulsion.

3. What does the rock cropping that is Jacurutu resemble?
(a) An immense castle.
(b) An infant worm.
(c) An immense worm.
(d) A throne.

7. Why does Farad'n burst into Jessica's bedchamber?
(a) He is abandoning his training.
(b) None of these.
(c) To report his hands have changed.
(d) He tries to seduce her.

11. What does Farad'n go to the library to do?
(a) Study Corrino history.
(b) Study Arakis' ecology.
(c) Find his hidden plans.
(d) Study Atreides history.

14. What is used to enrage the sandworms into attacking?
(a) Spice fumes.
(b) A worm thumper.
(c) Ozone from a pseudosheild.
(d) Fire.

15. What does Leto recall as he waits for night outside Jacurutu?
(a) Muad'Dib's mystic journey into the desert.
(b) His father's epic battle with Baron Harkonnen.
(c) Chaucer's route from London to Canterbury.
(d) Lewis and Clark's adventure West.

1. What does Leto tell the inner lives when they fall into silent, orderly ranks?

2. What does the "skin symbiote" allow Leto to do?

3. Where is House Corrino located?

4. How does Leto know the lifeless rock (Jacurutu) could sustain life?

5. What will Ghanima do if she is betrothed to Farad'n?

More summaries and resources for teaching or studying Children of Dune.