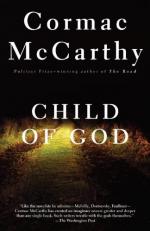 1. From what group did the White Caps splinter?
(a) The Panthers
(b) The Libertarians
(c) The Teamsters
(d) The Ku Klux Klan

2. Why does Ballard abruptly stop having sex with the dead girl?
(a) He is caught by the police
(b) He hears the truck drive away
(c) He cannot maintain an erection
(d) It starts to rain heavily

3. As Ballard busies himself in the woods, who does he imagine speaking to?
(a) His father
(b) The Sheriff
(c) Greer
(d) The dead girl from the car

4. In Ralph's house, what surrounds the stove?
(a) Chickenwire
(b) Cinder blocks
(c) Rings of soot and grease
(d) Wet rages

5. How are the two dead people in the car positioned when Ballard discovers them?
(a) The are seated next to each other in the front seats
(b) They lie in a spooning position in the back
(c) The man lies on top of the woman
(d) The woman is straddling the man

1. Where is Ralph's daughter when Ballard shoots her?

2. What flourishes are on the panties that Ballard buys?

3. When does Ballard deposit the dead man when he moves him away from the girl?

4. What does Ballard have hanging from his belt at the beginning of this section?

5. Which of the following is not something Ballard salvages from the fire?

1. Describe Ballard's appearance at the end of this section.

2. How do the police catch Kirby selling jars of whiskey?

3. How does Ballard react to Ralph's daughter's rejection of his advances?

4. How does Ballard subsist as the harsh winter descends?

5. How does Ballard's situation change in this section?

6. What does Ballard realize about the Ralph's idiot baby?

7. In what state is the town in this section?

8. What imaginary conversations does Ballard have in the woods?

10. What wakes Lester Ballard the night after his shopping spree in town?