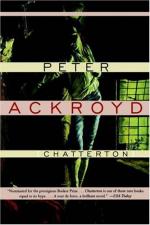 Peter Ackroyd
This set of Lesson Plans consists of approximately 99 pages of tests, essay questions, lessons, and other teaching materials.

1. Why does Charles go to the antique store?

Charles is an unsuccessful poet and has little money of his own. His wife Vivien has sent him to Leno's antique store to sell his music books.

2. Why does Charles not take money for the books?

While bartering with the owner of the antiques store, Charles spots a painting abandoned in a corner. Fascinated by the mysterious man it portrays, Charles trades his books for the portrait.

3. What does Edward think about Charles' portrait?

When Charles arrives home his son Edward is waiting for him outside their house. Charles excitedly shows him the painting, saying it will make them rich. However, Edwards is not impressed. He tells his father the painting is a fake.

4. What is the problem with Charles' portrait?

Charles' friend, Philip, tells him is that the man portrayed in the painting, John Chatterton, died in 1770, a very young man. However, the Chatterton in the portrait is middle-aged. Additionally, the date printed on the painting is 1802.