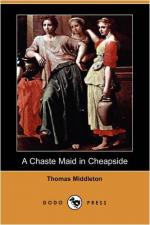 Thomas Middleton
This set of Lesson Plans consists of approximately 132 pages of tests, essay questions, lessons, and other teaching materials.

1. Whose opinion of them seems to concern the Yellowhammers most?

2. Who does Moll run away with when her mother runs out to find her?

3. Who challenges Sir Walter to a duel after Moll is discovered?

4. Why does Maudlin sound the alarm, causing everyone to run from the house in a panic?

More summaries and resources for teaching or studying A Chaste Maid in Cheapside.

A Chaste Maid in Cheapside from BookRags. (c)2022 BookRags, Inc. All rights reserved.