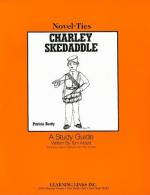 Patricia Beatty
This set of Lesson Plans consists of approximately 118 pages of tests, essay questions, lessons, and other teaching materials.

Charley's attitudes about killing change over the course of the book.

Part 1) What is Charley's attitude about killing Confederate soldiers at the beginning of the novel?

Part 2) How does that attitude change when he actually shoots a Confederate soldier?

Part 3) What is Charley's attitude toward killing at the end of the story? Does he believe the Confederate soldier he shot is alive or dead? How does he feel about that?

At the beginning of the story, Charley is sure that he will be able to handle a gun because he has shot toy guns at the arcade before. He is also positive that he will act heroically in battle.

Part 1) What are Charley's expectations of himself when he joins the soldiers? What is his biggest goal in joining the Union Army?

Part 2) Are drummer boy's supposed to fire weapons? Does Charely follow this rule...