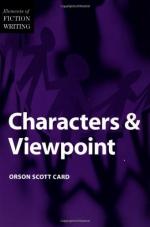 1. Which form of language requires more precision?
(a) Writing.
(b) Writing and speaking both require the same amount of precision.
(c) Speaking.
(d) Neither writing nor speaking requires precision.

3. What type of humor is injected into a comedy?
(a) Unconventional.
(b) Unacceptable.
(c) Incongruous.
(d) Inconceivable.

5. How should exaggeration be used when writing a comedy?
(a) With no boundaries.
(b) With extreme caution.
(c) Exaggeration should not be used in a comedy.
(d) Within certain boundaries.

6. Which Irish novelist does the author refer to when describing characters that change from situations beyond their control?
(a) Jonathan Swift.
(b) James Joyce.
(c) William Carleton.
(d) Charles Kickham.

9. In the author's opinion, what must a transformation be?
(a) Complete.
(b) Logical.
(c) Justified and logical.
(d) Justified.

12. How can a character appear to change while remaining unchanged?
(a) The author does not develop the character effectively.
(b) The reader is misinterpreting the character.
(c) They reveal the truth about who they were all along.
(d) They only change in front of certain characters.

1. Which series of novels by Robert Parker are listed as an example of characters that are influenced to change?

2. Which tenses are the most commonly used?

3. Which incidents in the story must the narrator be present for in order to make a first person narrative effective?

4. Which type of narrative is most often used when writing from a Presentation perspective?

5. What does "controlled disbelief" refer to?

More summaries and resources for teaching or studying Characters and Viewpoint.