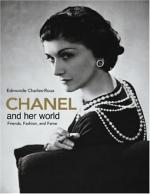 4. What was Chanel's sudden return to Paris fashion described as?
(a) A lightning reappearance.
(b) A well-timed homecoming.
(c) A rebirth.
(d) An unwelcomed return.

5. For generations, what had Chanel's family made a living gathering?
(a) Grains.
(b) Chestnuts.
(c) Mushrooms.
(d) Truffles.

6. In the city where Chanel was born, what influenced women's fashion?
(a) The cold climate.
(b) The harsh dust and sun.
(c) The proximity to the sea.
(d) Bohemian artistry.

8. What is described as an important center of style in Chanel's birth city?
(a) The courthouse.
(b) The church.
(c) The racetrack.
(d) The opera house.

12. Who was the first of Chanel's family to work as a peddler?
(a) Her uncle.
(b) Her grandfather.
(c) Her great-grandfather.
(d) Her father.

14. What was the style of the era when Chanel was born?
(a) Equestrian-inspired.
(b) Naval-inspired.
(c) Military-inspired.
(d) Ecclesiastic-inspired.

1. Who was the first of Chanel's relatives to give up day labor?

2. What kind of shop did Chanel open?

4. In her twenties, in which artistic field did Chanel attempt to find success?

5. What property did Chanel's great-grandfather rent?

Chanel and Her World from BookRags. (c)2021 BookRags, Inc. All rights reserved.