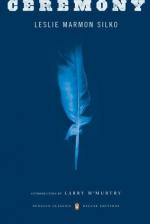 1. How does Ts’eh have Tayo’s cattle corralled?
(a) She enticed them with hay
(b) Her cattle dog herded them
(c) They ran into a arroyo with a dead end
(d) She sung them calm then put them in her corral

2. Where do Harley and Tayo pick up a ride after they leave the spring?
(a) Near the edge of the desert barrio
(b) At Harley’s house
(c) On the Acoma Road
(d) Nowhere, they are riding

3. What does Tayo say an Indian should avoid in Gallup?
(a) Any of the bars on the east side
(b) Being in Gallup after dark
(c) Going to any of the brothels on the south side
(d) Wearing a cowboy hat if you are an Indian

5. What does the medicine man say white people are to witchery?
(a) Blackness against the light
(b) No different than Indians
(c) Nothing, witchery does not affect white people
(d) Tools to be used

6. Out of what did the old male Indians whittle toothpicks?
(a) Cacti thorns
(b) Pinon twigs
(c) Tumbleweed
(d) Hickory branches

7. Why was Betonie’s grandmother thrown out of her village when she was born?
(a) She is born on a double full moon
(b) She is born with a caul
(c) She has hazel eyes
(d) Her mother has no pain when she is born

9. Why does Tayo think that white people have nothing?
(a) They do not realize they are ruining the earth
(b) They are being destroyed by their greed
(c) He does not like technology
(d) Everything the white people have was stolen from the Indians

10. What is Tayo’s mother doing before he is born that his Auntie sees?
(a) Kneeling under the old oak and crying
(b) Swimming in the river with a white man
(c) Standing under a cottonwood tree naked
(d) Dancing in the moonlight

11. Why does Josiah not brand the cows when he first gets them?
(a) He has the Mexican brand on his bill of sale
(b) They are too young
(c) He has no brand
(d) He wants to fatten them up first

12. What does Ku'oosh tell Tayo about the world?
(a) It is a frightening place
(b) It is strong and consistent
(c) It belongs to the Indians
(d) It is a fragile place

13. What does Harley have in his hand when the friends stop to pick up Tayo who is walking on the side of the road?
(a) A gun
(b) Two bottles of Garden Deluxe Tokay
(c) A camera
(d) Two cold beers

14. What does Emo carry in his little bag?
(a) Stones from the mountain
(b) Gems he stole from the Japanese
(c) Human finger bones
(d) Human teeth

1. Where is Thought-Woman sitting in the opening poem?

2. What does Tayo decide to do with the note when the door is not answered?

3. For what is Reed Woman scolded by her sister?

4. What is the medicine man’s residence called?

5. How does Harley get to a bar once when he had been sent to the far reaches of the reservation?