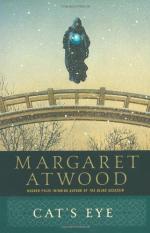 Margaret Atwood
This set of Lesson Plans consists of approximately 120 pages of tests, essay questions, lessons, and other teaching materials.

Andrea - This character is a young newspaper reporter between twenty and thirty years old, who conducts an interview about the painter's retrospective.

Mr. Banerji - This character is an Indian student of the main character's father who comes to Christmas dinner with their family. Later, this character marries and becomes a professor at the University of Toronto.

Ben - This character is is the main character's second spouse. This character has a son by a previous marriage and runs a travel agency specializing in Mexican destinations.

Charna - This character organizes the main character's retrospective at the Sub-Versions gallery in Toronto and writes a catalog that uses scholarly and trendy language to interpret the paintings.

Cordelia - This person, who was expelled from private school for making an obscene...