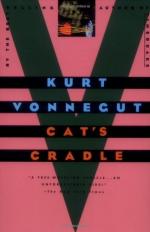 5. Where does Newt's sister live, according to his letter in Chapter 5?
(a) Indianapolis, Indiana.
(b) Cleveland, Ohio.
(c) Philadelphia, Pennsylvania.
(d) Montrose, California.

8. Who is the poet that John let stay in his apartment while he was in Ilium in Chapter 36?
(a) Lyman Enders Knowles.
(b) Sherman Krebbs.
(c) George Minor Moakely.
(d) Marvin Holderness.

9. What is the name of the tombstone establishment where John goes with the cab driver in Chapter 31?
(a) Avram Breed and Sons.
(b) Enders and Knowles.
(c) Moakley and Sons.
(d) Anderson and Bracknell.

1. Where does the narrator describe the Episcopalian woman living in Chapter 3?

2. What is the population of San Lorenzo, according to the newspaper supplement in Chapter 38?

4. What is the name of Dr. Breed's secretary?

5. When was Bokonon born?