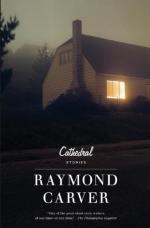 Raymond Carver
This set of Lesson Plans consists of approximately 136 pages of tests, essay questions, lessons, and other teaching materials.

1. According to the narrator, his wife had helped the blind man organize his little office where when she worked for him?

3. What does the blind man say “never ends” in the story?

4. What is the blind man’s response when the narrator asks “if he wanted to smoke some dope with me”?

5. When does the narrator say his wife was to marry her fiancé when she worked for the blind man?

1. What can the reader discern of the narrator’s jealousy through the exposition in the beginning of the story?

2. How does the narrator describe the scene once his wife has gone upstairs after dinner?

3. Where in the story do you see the first elements of transformation in the protagonist?

4. How is the beginning of the television show about the church described?

5. Which of the characters in the story stands out from the theme of alienation? Why?

6. What activity does the blind man suggest to the narrator during their discussion about cathedrals?

7. Why does the narrator apologize to Robert during their discussion after his wife’s fallen asleep?

8. What role does alcoholism play in “Cathedral”?

9. How is the post-dinner conversation described by the narrator? What prompts him to turn on the television?

10. How is the theme of alienation illustrated through the protagonist in the story?

Analyze and discuss the narrator’s wife in “Cathedral.” How old do you approximate this character to be? What qualities does the wife exhibit through her actions in the story? Based upon the author’s dialogue, how would you characterize the narrator’s relationship with his wife?

Analyze and discuss the theme of jealousy in the story. From where does the narrator’s jealousy originate? Do you think he has reason to be jealous of his wife? How does the narrator illustrate jealousy regarding the blind visitor? Are there examples of symbolism or imagery that support this theme?