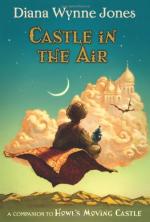 Abdullah is a young carpet seller in a Bazaar in the city of Zanzib. Abdullah, is a young man with big dreams. He inherited money from his father to start the business. Abdullah is not rich, however, he makes a decent living and seems to be relatively happy. Abdullah is also an avid daydreamer that wishes for grand things.

2. What is Abdullah's relationship with his father's family?

More summaries and resources for teaching or studying Castle in the Air.

Castle in the Air from BookRags. (c)2022 BookRags, Inc. All rights reserved.