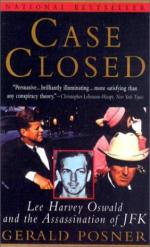 Gerald Posner
This set of Lesson Plans consists of approximately 115 pages of tests, essay questions, lessons, and other teaching materials.

This person was born in New Orleans and moved frequently during his or her youth, was sent for psychiatric evaluation and then went to a residential treatment home.

This person was a pharmacology student, married quickly, and had a daughter in January 1962 and a second child in October 1963.

This person was born in Chicago, the fifth of eight Jewish children, served in the Air Force, and died in 1967 from cancer.

This person, born in Iowa and a graduate of Tulane Law School, worked for the FBI and was later a district attorney who conducted an official investigation regarding an assassination.

This person's husband died two months before one of her sons births and she placed her sons in a children's home.

This person was a KGB agent who approached the CIA about defecting to...

More summaries and resources for teaching or studying Case Closed: Lee Harvey Oswald and the Assassination of JFK.