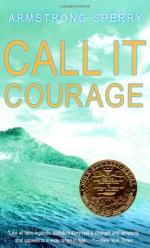 1. Why did he initially think that Maui had led him to this island?
(a) So he could practice his hunting skills.
(b) So he could have a home of his own.
(c) So she could speak with him.
(d) So he would be safe.

5. How does he feel as he heads out to the reef?
(a) Excited.
(b) Secretly hoping he does not encounter the shark.
(c) Irritated.
(d) Hoping he can stab the shark.

6. He would be able to return home with a boar's tooth necklace as proof of what?
(a) His bravery and hunting prowess.
(b) He likes to kill.
(c) He killed a boar.
(d) He is strong.

9. What does he think about the skills he had acquired back home?
(a) They are proving useful now.
(b) They are a waste.
(c) They need to be improved.
(d) They help a little.

10. What does he wonder about this island?
(a) Where he should build his home.
(b) If there are animals on this island.
(c) If this is where they offered their sacrifices.
(d) If he will ever escape it.

15. What does Mafatu begin to take care of?
(a) Taking care of Uri.
(b) Finding food.
(c) Building his canoe.
(d) The other myriad tasks that need doing.

1. What does he want from his town and his father?

2. Where are fish hooks made from bone, coconut-shell bowls, an extra clothing garment made waterproof for wet weather, and a coil of sennit found?

3. What has rooted Mafatu to the ground?

4. What have been recently burned?

5. What would he never again be called?