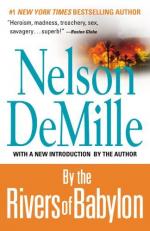 By the Rivers of Babylon Test | Final Test - Easy

1. What does Shear-jashub see as his mission?
(a) To tell the story of the Jews in captivity.
(b) To preserve the ancient records of Babylon.
(c) To ensure that a remnant of the Jews survives if Jerusalem is destroyed.
(d) To teach Iraqis about Judaism.

2. What does Jacob Hausner encourage Moshe Kaplan to do?
(a) Attempt to shoot Ahmed Rish.
(b) Take an outpost position to warn the others.
(c) Collect ammunition for Naomi Haber.
(d) Attempt an escape down the west side.

4. What does Samuel Bartok offer to do regardless of whether the rescue mission succeeds?
(a) Hunt down and kill Ahmed Rish.
(b) Tell the story of what happened in Babylon.
(c) Kill the remaining Ashbals.
(d) Take the Iraqi Jews home to Israel.

5. How is the second onslaught by the attackers better done than the first?
(a) They are more knowledgeable.
(b) They are quicker and quieter.
(c) They are more prepared to fight.
(d) They are smarter and faster.

6. What solution does Miriam Bernstein propose?
(a) Attacking the small force on the west side.
(b) A frontal assault against the invaders.
(c) Forming a Masada suicide pact.
(d) Bargaining with Ahmed Rish.

7. What does Ahmed Rish think is the advantage the gods have sent the attackers?
(a) The darkness.
(b) The quiet.
(c) The wind.
(d) The heat.

9. What does Jacob Hausner think all their cleverness and strength has accomplished?
(a) Earned a place in history books.
(b) Bought time for help to arrive.
(c) Saved them from the attackers.
(d) Prolonged their suffering.

12. As the attackers near the crest, why are they unable to retreat?
(a) They are too anxious for the fight.
(b) They would fall in the darkness.
(c) There will be more casualties retreating than advancing.
(d) They would lose face.

13. Why does Hausner believe many of the defenders will not stand and fight?
(a) They are conspirators.
(b) They prefer to die.
(c) They are not soldiers.
(d) They expect to be rescued.

14. What role does Shear-jashub say Jews in Babylon have played in history?
(a) They were the center of Jewish culture and learning.
(b) They suffered on behalf of the entire culture.
(c) They taught Jewish beliefs to the Babylonians.
(d) They integrated Jews into the larger world.

15. What information does Ahmed Rish give Jacob Hausner?
(a) Benjamin Dobkin is alive.
(b) Deborah Gideon is alive.
(c) Tom Richardson was the spy.
(d) Yosef Bernstein was shot down and killed.

2. Why is Teddy Laskov unable to shoot the attackers?

3. What does Jacob Hausner say will be their first action if they are overrun?

4. Why does Ahmed Rish need to keep the defenders alive?

5. How does Isaac Burg explain the defenders' success?