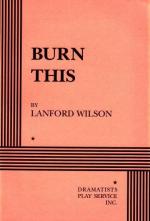 4. After hearing this, Pale becomes angry and accuses her of being a different person________.

5. She crossed the room without turning on the lights and _________ speaks form the shadows.

Burn This from BookRags. (c)2022 BookRags, Inc. All rights reserved.