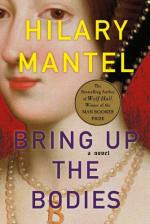 Hilary Mantel
This set of Lesson Plans consists of approximately 156 pages of tests, essay questions, lessons, and other teaching materials.

1. When Rafe thinks about Henry's dual nature, he considers which late character's comment that dealing with Henry is "like sporting with a tamed lion" (208)?
(a) More.
(b) John Seymour.
(c) Edmund.
(d) Wolsey.

2. Who cries while Jane Rochford is being questioned about Anne's miscarriage by Henry?
(a) Jane Rochford.
(b) Mary Shelton.
(c) Jane Seymour.
(d) Smeaton.

3. The members of which family shout their own last name in the moments they think Henry is dead?
(a) Seymour.
(b) Smeaton.
(c) Norris.
(d) Boleyn.

4. When Cromwell finds his son Gregory creating religious figures, he is with boys who usually work in which room of the household?
(a) The mail room.
(b) The greenhouse.
(c) The kitchen.
(d) The wood room.

5. To whom does Cromwell write with news of Katherine's imminent demise in Part One, Chapter 3: Angels?
(a) Weston.
(b) The Pope.
(c) Brereton.
(d) Gardiner.

8. Cromwell tells his son Gregory that which kind of people pray when they want to be rid of their spouses?
(a) Men.
(b) Religious fanatics.
(c) Women.
(d) Unhappy.

10. Cromwell notes that Henry's leg injury had already been prone to taking what action, even before Henry's recent fall?
(a) Ulcerating.
(b) Smelling bad.
(c) Oozing.
(d) Getting infected.

11. In what country is Gardiner staying when he finds out about Katherine's imminent death?
(a) Spain.
(b) Belgium.
(c) England.
(d) France.

12. Which weapons does Mantel use in a simile describing the Christmas star Cromwell stares at in Part One, Chapter 3: Angels?
(a) Hatchets.
(b) Awls.
(c) Blades.
(d) Scythes.

13. Who is screaming into Cromwell's face when he thinks of a piece of advice his father had given him?
(a) Weston.
(b) Anne.
(c) Henry.
(d) Smeaton.

1. Cromwell hears about Anne's miscarriage soon after he hears of the death of which character?

2. Cromwell rushes to help which character to his feet in Part Two, Chapter 1: The Black Book?

3. Part Two, Chapter 1: The Black Book takes place from January to April of which year?

4. Chapuys tells Cromwell near the end of Part One, Chapter 3: Angels not to wear which item he had lent to Cromwell?

5. What nickname does Cromwell call Fitzwilliam?

More summaries and resources for teaching or studying Bring Up the Bodies.

Bring Up the Bodies from BookRags. (c)2022 BookRags, Inc. All rights reserved.