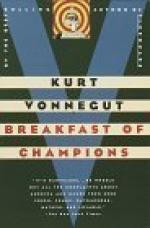 This quiz consists of 5 multiple choice and 5 short answer questions through Chapter 17.

4. Where do Kilgore and the driver arrive at the beginning of Chapter 12?
(a) Washington D.C.
(b) Midland City.
(c) Philadelphia.
(d) New York.

5. What does the literature Kilgore is reading say about free will?
(a) Only the creator possesses it.
(b) It is not what we think it is.
(c) Only the reader has it.
(d) It is in everyone.

1. What is Dwayne's medical condition mentioned in Chapter 1?

2. Who also checks into the hotel along with Cyprian?

3. What does Kilgore muse about after arriving in the city in Chapter 12?

4. What does Harry infer about Dwayne's ignoring him at the car dealership?

5. What did the element that Celia ingested do to her?