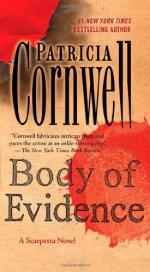 Patricia Cornwell
This set of Lesson Plans consists of approximately 122 pages of tests, essay questions, lessons, and other teaching materials.

1. In Chapter 1, how does Pete know that Beryl has not eaten a snack before she is killed?

Pete knows that Beryl has not eaten a snack before she is killed because from analysis, the gastric contents of her stomach were fully digested by the time she was attacked.

2. What does Kay keep asking herself as she investigates Beryl's house with Pete Marino?

As Kay and Pete are investigating Beryl's house, Kay keeps asking herself "Why did she let him in"?

3. In Chapter 2, in addition to telling Kay that he is relocating to northern Virginia, for what purpose does Mark James visit Kay?

Mark James visits Kay to inform her that his firm is in discussions with Beryl about a contract dispute she has with the reclusive Cary Harper over a nondisclosure issue.