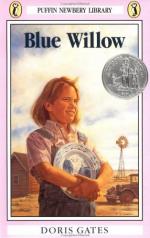 Doris Gates
This set of Lesson Plans consists of approximately 131 pages of tests, essay questions, lessons, and other teaching materials.

• Jenny Larkin is a ten-year-old girl sitting on the steps of a shack into which her mother and father and she are moving as yet one more temporary home.

• Janey meets a girl named Lupe from a Mexican family--the Romeros--living nearby but Janey is not sure it is worth the effort to make friends because her family will just be picking up and moving again soon.

• Lupe's family has lived in this location for a year and Janey is envious of living in one place for that amount of time.
• Although Janey does not have a brother or sister as Lupe does, Janey has a blue willow plate which she feels is more valuable than siblings.

• The blue willow plate had belonged to Janey's great-grandmother and was passed down to Janey's biological mother who has died.

More summaries and resources for teaching or studying Blue Willow.