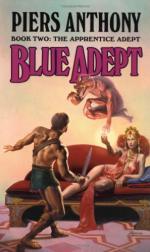 Piers Anthony
This set of Lesson Plans consists of approximately 148 pages of tests, essay questions, lessons, and other teaching materials.

This is the setting for the first half of the novel, and is filled with mythical creatures.

This is the setting for the other half of the novel, and is full of androids.

This is the protagonist's castle-like home.

This is the home of the protagonist's adversary.

This is a competition, for which the ultimate prize is Citizenship.

This is an annual competition held by the unicorns, where the protagonist receives a challenge.

This object allows the possessor to retain magical abilities even in magic-nullifying circumstances.

This is a term for a special connection between two beings.

This phrase is used to express love without a sense of commitment from the other party.