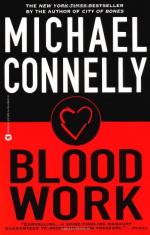 1. Why does Graciela want Terry to find her sister's killer?
(a) Terry was given her sister's heart.
(b) Terry dated Graciela.
(c) Terry was married to Graciela's sister.
(d) Terry knew her sister.

3. What is Buddy always interested in talking to Terry about?
(a) His old cases.
(b) People he suspects in the marina.
(c) His new cars.
(d) His ex wife.

5. What does Terry begin to think about Gloria's killer's tracking ability?
(a) The killer was unable to track her for more than a month.
(b) Gloria was a random attack.
(c) He followed Gloria for days.
(d) He was not a good stalker/tracker.

8. What does Terry's doctor think about his decision to help Graciela?
(a) It will take his mind off of his recovery.
(b) It will be too stressful for him at this time.
(c) He should avoid getting romantically involved.
(d) It will be okay, as long as he takes it easy.

9. What did Terry forget about while working on the case today?
(a) That he was hosting dinner for Graciela and Raymond.
(b) To make dinner for his mother who is coming over later.
(c) he said he would go to Buddy's baseball game.
(d) He promised to help Jaye with some evidence.

10. How was help slowed down for James Cordell?
(a) The operator messed up the phone number and caused a delay in their response.
(b) Noone accidentally went to the wrong police station.
(c) Too many people were calling the 911 station.
(d) No one ever called the police.

11. What does Arrango take pleasure in?
(a) Making Jaye embarrassed.
(b) Slowing down the case.
(c) Capturing killers.
(d) Seeing Terry fail.

12. What must Terry be careful about concerning Buddy?
(a) Buddy seems a little too interested in cases.
(b) He must make sure Buddy does not think they have any sort of partnership.
(c) Buddy will get too nosy and get himself killed.
(d) Buddy's affections towards him.

13. What is Arrango's reaction to Terry's visit?
(a) Congratulatory and excited.
(b) Almost hostile.
(c) Surprised.
(d) Crazed.

15. What is Graciela interested in as she and Terry talk?
(a) What is for breakfast the day.
(b) His family.
(c) His life and accomplishments.
(d) All of his past cases.

1. What is buddy stunned by after he sees Terry?

2. Who must give Arrango permission to give the tapes to Terry?

3. What does Bolotov decide concerning Terry?

4. What was taken from several gun stores?

5. Who has also contacted the shooting victim?