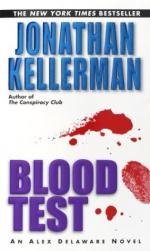 1. What is the name of the club that Beverly asks Alex to meet her at?

2. What does Robin tell Alex she bought him during their phone conversation in Chapter 13?

3. What game do Alex and Woody play when they meet?

4. In Chapter 5, what is Beverly Lucas holding across her chest "like a shield" as Raoul yells at her?

5. What does Alex tell Milo that Richard Moody has on his left arm?

1. Why does Raoul say the parents who were Jehovah's Witnesses, were happy when Raoul took them to court to force them to allow blood transfusions for their daughter?

2. How does Beverly describe Woody?

3. How does Nona react to Raoul's inquiry about Woody's health in Chapter Three?

4. Why is Alex a bit reluctant to call Milo with the information he learns about Augie from Bev?

5. What reason does Diane Severe give Mr. Moody for only allowing him supervised visits with his children?

6. Why does Moody approach Alex in the parking lot of the court house after his hearing?

7. What does Alex tell Milo is done to help children cope with being in the Laminar Airflow rooms?

8. Why does Milo say that Robin's trip to Japan puts Alex's and Robin's relationship in a new perspective?

10. Why does Alex describe Raoul's world as "madness"?

What are the three main settings of the novel? How do they differ from one another? How do each of them make Alex feel?

What outward appearance does the Touch portray to the public? What is the reality of the situation? What really happens at the Retreat?

Describe Alex Delaware as the protagonist of the novel. What makes him the protagonist? What is he like? What do his interactions with Richard Moody, Woody, and Raoul reveal about his character?