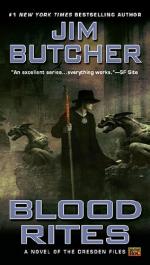 1. What does Ebenezar agree to do?
(a) Hold Harry's power in reserve.
(b) Nothing.
(c) Give Harry a special, secret spell.
(d) Help control Mavra's powers.

3. Why does Bob say public places are easier to invade?
(a) They have so many people coming and going.
(b) They are more accessible.
(c) They are often ill secured.
(d) They do not have thresholds.

4. Where do Harry, Murphy and Ebenezar go?
(a) To meet Kincaid.
(b) Back to the family reunion.
(c) To bring a spell to the party.
(d) To find Mavra's maker.

5. What does Murphy's mother tell Harry?
(a) Why Murphy's father killed himself.
(b) Murphy is not right in the head.
(c) Murphy is ill.
(d) Murphy is reluctant to go.

1. Who shows up to give Harry a ride?

2. What does Raith say will happen when Thomas and Harry are dead?

3. What does Harry know about Raith?

4. Whom does Murphy shoot?

5. What shocks Harry about Justine?

1. What does Harry see when he looks at Kincaid, what does he tell Murphy to reassure her and what do they hear from the dark?

2. What happens when Harry and Murphy encounters the first group at the shelter?

3. What does Murphy say about Lara and what is Harry's response?

4. Where and with whom, does Harry go and what does he do when they first arrive there?

5. What does Ebenezar tell Harry about his role in Harry's life?

6. Where are the children at the shelter, how are they being held and who can rescue them?

7. What does Harry offer Lara for her help and what is her response?

8. What did Harry's mother do to Raith and what is Raith's response?

9. What does Bob tell Harry about the vampires when Harry gets home?

10. How does Harry stop the fire assault from two human servants?