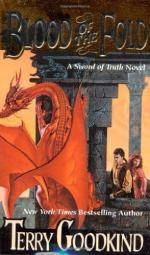 Blood of the Fold Chapter Abstracts for Teachers

Terry Goodkind
This set of Lesson Plans consists of approximately 116 pages of tests, essay questions, lessons, and other teaching materials.

• Six naked women are on a boat and have just finished a ritual to contact their dark master known as The Keeper.

• They tried to contact the Keeper but instead an evil man called Jagang warned he would hurt them if they did not obey him.

• They hate Jagang but do what they have to get back in the good graces of the Keeper.

• When the women run out on the deck, the captain and the men leer at the women.

• One woman casts a spell and the men are forced to obey.

• The women are angry at Richard Rahl who is the reason they were forced to flee.

• The Sister Ulicia is the strongest of the Sisters, becomes the leader, and promises that...

More summaries and resources for teaching or studying Blood of the Fold.

Blood of the Fold from BookRags. (c)2021 BookRags, Inc. All rights reserved.