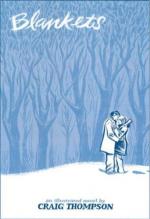 Craig Thompson
This set of Lesson Plans consists of approximately 93 pages of tests, essay questions, lessons, and other teaching materials.

1. Craig says that when he first arrived in Michigan, he and Raina were ____.

2. Which image appears on Phil's pajamas?

5. What is the name of Raina's brother-in-law?

1. Explain the incident in which Phil and Craig get into trouble for peeing on the bedroom floor.

2. How does Craig relate to the stories about Raina's childhood?

3. What mural is painted on Raina's bedroom wall?

4. How does the story about Socrates affect Craig? What does Craig do?

5. What occurs after Craig gets home?

6. What does Raina say in the car that upsets Craig?

7. What is Raina's opinion of the Garden of Eden?

8. What is the structure of Raina's family?

9. Explain the scene when Craig and Raina return to the mountain.

More summaries and resources for teaching or studying Blankets: An Illustrated Novel.