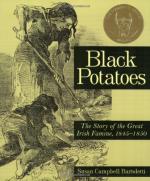 1. Why was the summer of 1845 considered to be particularly fickle?

July began much hotter than even the oldest people could remember. The heat spell only lasted a few days, and was followed by cool, gloomy, damp weather. Heavy rains fell daily for the first three weeks of August.

2. Why were some farmers nervous about the potato crops?

Since potatoes are tubers, they cannot be seen as they grow underground. Farmers could only hope that the vegetables were thriving under the harsh conditions.

3. Although some farmers were concerned, many others were not. What was the prediction regarding the crops?

The newspapers predicted a bumper crop on the two million acres on which potatoes had been planted.

4. According to the farmers, what was the cause of the damage to the potatoes?

Some blamed the disaster on the weather. Others blamed the darkened skies on fairies, whose tribes were evidently battling over the potatoes.